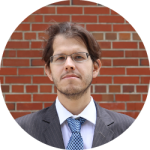 One-lane freeway sequential links between two origin/destination nodes can be modeled as two-lane highways in TSIS. CORSIM is able to simulate platooning, and passing movements in the opposite direction of traffic where passing is permitted.

The case shows a model with short passing lanes on a two-lane highway with heavy traffic (1,000 vph and 50% trucks).
Trucks are biased to use the rightmost lane of the passing lanes, which is a standard regulation in some states and countries. Two-lane highway performance improved as compared to a base scenario with prohibited passing, and the HCM LOS improved from D to C. Biased trucks are shown in red on the animation as faster vehicles overtake using the passing lane.

Don’t miss out on updates and trends in the transportation industry.